Which type of screw best suits your application? Here’s a concise look at all three.

Lead Screw assemblies or drives are widely used to generate linear motion. And you can get this motion by turning either the screw or the nut. Three primary types of screws are used for linear-motion actuators: Acme, ball, and roller. The differences are in thread shape and the design and operation of the matching nut.

Acme screws use strong threads with generally "trapezoidal teeth" which are usually rolled onto a steel shaft or leadscrew. As the shaft turns, its threads transmit linear force to the nut. Efficiency is determined by "nut material", "leadscrew", and "lubrication", and is relatively low, ranging from 20 to 40%. This level of efficiency can prevent loads or external forces from back-driving the assembly, which can be an advantage. However, inherent energy losses mean Acme screws need more motor torque compared to other screw types.

Common nut materials include self-lubricating plastics, polymers, and metals such as brass or bronze. Nonmetallic materials generally have higher efficiencies due to lower coefficients of friction and often do not require lubrication. Metal nuts such as bronze can handle higher working loads but may require lubrication, which can lead to contamination.

Wear characteristics of Acme nuts depend on nut material, environment, lubrication, and the application. The amount and rate of wear is generally not easy to predict due to the large number of variables. But to compensate for wear, some manufacturers build Acme nuts out of two halves biased to each other with a spring. Nuts using this design are commonly referred to as “anti-backlash” or “zero-backlash.” It is important to note that these nuts may add friction.

Acme screws are available in a variety of diameters and leads. Metric versions, commonly called trapezoidal screws, are also available. Although English and metric designs have similar tooth shapes, they are not interchangeable due to a 0.5° difference in flank angles.

Ball screws use circular or ogival (Gothic arch) threads. The nut has the same thread, letting ball bearings fit between the two grooves to transmit force and relative motion. Efficiencies range from 70 to 95%.

The bearings roll and recirculate through one or several circuits in the nut as the screw or nut rotates and one or the other moves. Ballscrew nuts differ in the number of ball-bearing circuits and how they control recirculation paths. Ball-bearing path is critical in determining an assembly’s maximum speed. Alternative designs, such as internal paths or end returns, offer minor advantages such as higher speeds and less noise.

Ball screws are available in a variety of diameters, leads, and accuracies with both metric and English leads. A grade system regulated by ISO-3408 classifies ball-screw lead accuracies.

The grade can help determine the lead accuracy of an assembly. These grades do not factor in any backlash specifications. However. Grade 1 and 3 screws are almost always ground for precision. Grinding, while precise, is also time consuming and more costly. Rolling is the way most other grades are made.

Backlash in a ball screw can be adjusted in a number of ways. A common method is to load each circuit with balls of a diameter that gives the desired backlash. This method may also be used to preload a system. Another preloading technique is to install two nuts biased against one another and locked into position. Having two nuts on a single ball screw will not double the force capability of the system.

Roller (planetary) screw threads are triangular and transmit force through a matched set of threaded rollers in the nut. Rollers rotate while contacting the screw’s threads. The nut’s rollers have significant surface contact with the screw, letting them transmit high forces while giving the assembly a longer life compared with ball screws of similar diameter.

Roller screws are most commonly ground to provide continuous contact area, smooth motion, and high thrust outputs. However, some roller screws are precision rolled to lower costs, with some possible sacrifice in performance. 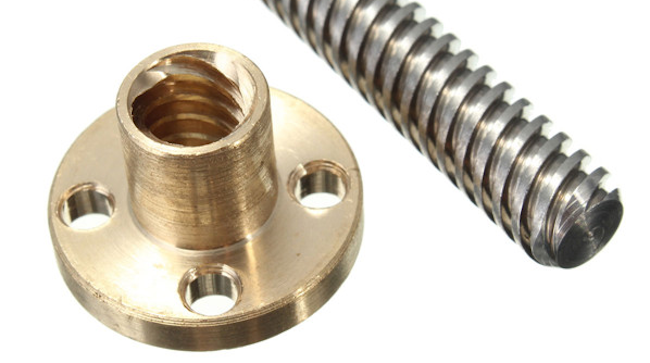 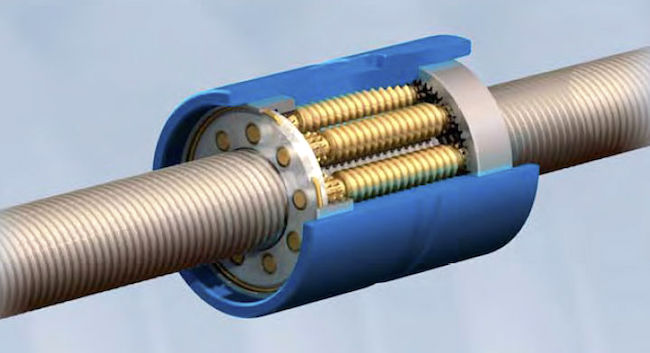 What is Lead Screw Start

Pitch is the distance between screw grooves and is commonly used with inch sized products and specified as threads per inch.

Lead is the linear travel the nut makes per one screw revolution and is how ball screws are typically specified.

The pitch and lead are equal with single start screws. For multiple start screws the lead is the pitch multiplied by the number of starts.

Backlash is the slop in any toothed (gears) or threaded (screws) drive system. Here’s info on what it is, how it is measured, and what the designer of such systems can do to reduce it. This article is not aimed at the engineer but rather at the lay person or other user of self-built machines, some of which may use screws for linear positioning. The impetus for writing this came from questions posed about the decision to use which lead screws and anti-backlash nuts to be used in the self-built CNC machine, 3d Printers. 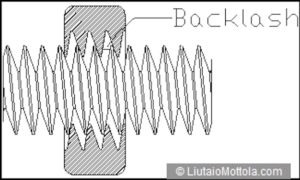 What to do About Backlash

Backlash is a measurable quantity. The simplest way to measure it in a screw and nut is to push the nut as far as it will go in one direction and then to measure how far it can move in the other direction.

This is because the initial turning of the screw takes up the backlash but does not move the nut. The nut only moves after the screw has turned enough so its threads are bearing on the right side surfaces of the nut threads.

The backlash can be a problem in positioning systems that depend on a given number of rotations of the screw resulting in a given positioning of the nut.

If the positioning accuracy requirement of the system you are designing is less than that of the backlash in the linear drive components you intend to use then the backlash can simply be ignored. For example a self-built machine intended to do very rough hogging out of waste wood might not need positional accuracy of any more than 0.1”. A machine built to cut lengths of tubing, and that machine only had to be accurate to within an inch. So sometimes the application calls for less accuracy than there is backlash in the linear positioning system, and in those cases the backlash can be ignored.

There are cases where the amount of backlash is known and it is always known which side of the screw thread is contacting the nut thread, and in these cases it is possible to simply subtract out the backlash where appropriate. This is the essence of software backlash compensation, which is offered by some of the computer software available to drive Computer Numerical Control (CNC) machines. If the machine you are designing is not a CNC machine than this would not be an option of course.

Most backlash reduction schemes involve mechanical pre-loading of the nut for movement in both directions. In the examples above when the screw was actually driving the nut and carriage, the screw was driving the load of the carriage assembly. If it starts turning the other way it is unloaded until the backlash is taken up, at which point it begins driving the load of the carriage assembly the other way. Preloading, that is, imposing a load on both sides of the screw thread simultaneously even while it is not moving means there is never backlash that needs to be taken up.

In practice such an arrangement has some problems when metal nuts are used with metal screw, as tolerances of the screw and nuts, small positioning irregularities and expansion and contraction of the metal components with changes in temperature tend to make things bind up. But this can work surprisingly well when plastic nuts are used on a metal screw.

Another common way to preload the screw is to mount only one of the nuts to the carriage and have the other secured to the mounted nut by some linear slide mechanism that keeps it from spinning on the screw. The two nuts are then pushed apart (or pulled together) by a spring. The problem with this approach is that the spring force must exceed that presented by the load of the carriage assembly and this can cause considerable friction and wear of the screw and/or nut. Again, this is less of an issue with some plastic nuts. The advantage of this arrangement is that the assembly is self adjusting for wear.

The backlash specifications of various screws that could be used as linear positioning devices in shop-built machines.

Probably the cheapest screw that can be used for positioning drives is standard hardware store threaded rod. This material is beloved by hobbyists and tinkerers since it is inexpensive and readily available. It wasn’t designed for motion applications and it wears very quickly, but it can still be used to good effect in machines which will only see light and intermittent duty. Its tolerances are not that hot either, but in an application where backlash would not be an issue this wouldn’t matter much. Typical backlash in threaded rod and machine nuts varies with rod diameter and thread pitch, and of course with wear.

Applications which need linear positioning in machines that will see heavy and continuous duty will generally make use of Acme threaded rod and Acme nuts. The threads of Acme rod provide more contact area on the side walls of the threads and so do not wear as quickly as plain threaded rod. Tolerance specs are better and initial backlash specs are better too.

There are two Acme thread standards.

— General purpose (G) Acme thread is available in three classes 2G, 3G, and 4G. The 2G class is the most common and the least expensive. The higher classes offer reduced backlash. The other Acme thread standard is called

— Centralizing (C) Acme thread, and is often referred to as precision Acme thread. It too is available in three classes – 2C, 3C, and 4C.

See Machinery’s Handbook or other references for more on Acme thread specifications. But the point here is that it is possible to buy Acme threaded rod and nuts that offer very good backlash specifications, and that these specifications may be good enough so that backlash can simply be ignored.

2 thoughts on “Critical Look at Acme, Ball, and Roller Screws for Linear Motion”

This site uses Akismet to reduce spam. Learn how your comment data is processed.